Posted on February 5, 2016 by Danielle Taylor

When my editor at Blue Ridge Outdoors magazine heard I was going on a national parks road trip, he suggested that I write a blog series for www.blueridgeoutdoors.com based on this journey. I wrote the following post as the initial entry for that series, and I wanted it to introduce readers to the idea behind this trip that they might read about through the year. I also wanted to convey this experience in a way that they could connect to, so I hope this accomplishes that. Stay tuned for updates on the series! This first post is a little weird, but I hope you like it :). 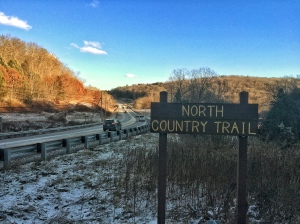 Trailhead sign just off US-322 south of Clarion, Pennsylvania.

It only took half an hour to drive from my home to the trailhead, but it felt like a lot longer. My short hike on the North Country National Scenic Trail today will be the start of several goals for this year, and it’s been a rough road so far just to get here. And I haven’t even gotten out of the car.

It’s January 11, a little less than two weeks into the new year. I set a resolution to hike at least 100 miles on this trail this year, and I’m pretty sure I can do it if I can work out the logistics in my ever-shifting schedule. The trail stretches across the “red plaid nation,” as the website called it, from New York to North Dakota, and it runs right through the county next to mine here in rural western Pennsylvania. Plus, I should be visiting some other areas of the country where the trail runs this year, so I hope I’ll get to see a few different sections, at least.

Well, we’ll see, I think pessimistically, squinting as I spot the trailhead from behind my salt-frosted windshield. It’s cold out there, and I’m a little grumpy right now.

From what I can see of the Eagle Scout project set of plywood stairs leading up from the parking lot, the start of the trail looks decently well-maintained, at least. My stomach starts feeling a little of that happy, contented feeling I always get when I’m about to spend some time wandering around in the woods, but it’s a little dulled by the part of me that sort of resents that I’m here, a grand 30 miles from home, instead of somewhere exotic and far away right now. Weirdly, I think of how Harry Potter felt when he was miserable and doing detention with Umbridge, but the bit of Lord Voldemort inside him was really pleased that the Death Eaters had broken out of Azkaban, making Harry feel an internal conflict he didn’t understand. I at least know exactly why I’m crabby.

Stop bitching, I tell myself while zipping up my coat and pulling on my gloves in the driver’s seat. Yours are first-world problems. I’m just in a bad mood. As I open the door, the frigid air rushes in and instantly chills my cheeks. Yaaay… This is not going to be fun. I don’t even want to stand up, I lament, my boots scraping back and forth across the pavement as I swing my legs, trying to get the blood flowing and hype myself up for this little hike.

This resolution is part of a bigger goal to explore all 59 U.S. national parks and eventually all of the other National Park Service sites as well, starting this year in celebration of the National Park Service’s Centennial anniversary in 2016. My mom even got me one of those snazzy little park passport things so I can start collecting stamps as I visit each place. The parks project is one part of the even bigger goal to build a sustainable career as a freelance writer, which I think (and am finding so far to be true) will help me live a happy and fulfilled life, my ultimate aim.

It sounded good when I mapped it all out, but happily ever after sure is taking its time, I think darkly as I heave myself, coughing, out of my battered Outback and across the parking lot to the trailhead. I had this epic plan all laid out to set off on this grand national parks adventure. I start up the stairs and begin walking on the trail, making first tracks upon last night’s two-inch snowfall. Be careful, you klutz. Watch your step. Don’t slip on the leaves and hurt yourself.

Somewhere, I had read that the summit of Cadillac Mountain in Acadia National Park is the very first place in the entire country where you can glimpse the sunrise in winter, so I was going to kick off the whole road trip by doing a pre-dawn hike to the top of the mountain on January 1. It all seemed so symbolically appropriate and badass and like the perfectly all-boxed-up-with-a-bow way to set out on this next phase of my life I’ve been looking forward to reaching for so long.

And then I HAD to get the flu right at the worst possible time, two days before I was set to depart for Maine. Of course. I trudge along, noticing that the only other footprints on this trail today came from a deer. The route reaches a draw, and I pick my way across the rocks, careful not to slip on any moss and end up on my ass, in pain and with the wind knocked out of me, sitting in a stream of freezing water. That would be just like me.

The past two weeks have been a whirlwind of antibiotics and hacking my lungs up and trips to the doctor and losing my voice and sleeping at crazy hours and generally feeling miserable and in a tizzy as my little plague of biblical proportions (at least in my mind) morphed from flu to respiratory infection to laryngitis. Ugh, scoffs the metaphorical demon on one shoulder. Relax, begs the nagging responsible annoying angel on the other side. Be present in the moment and take note of what you’re experiencing. You’re supposed to be enjoying this, you know. The path widens and flattens, enough that a truck could drive on this part, I notice. But a truck couldn’t get here, so that was a dumb observation. I climb over a downed tree blocking my path and follow the trail as it bends right and up a hill.

And I’m STILL sick, I think, glancing at a nest some bird abandoned a long time ago, not taking too much interest. I clear my throat and spit, my phlegm perfectly conveying my irritation. This is not the brilliant, exciting journey I had imagined. I’m supposed to be somewhere else right now.

Then, in that moment of feeling so cruddy for myself in a backwards attempt to somehow feel better, I stop. The shimmery little lung oyster I just hocked onto the ground catches my eye, and it hits me just exactly how stupid I’m being. After a moment, I start laughing at myself and my pathetic little metaphor of infected self-pity that’s now beginning to freeze to the earth.

I’m actually laughing out loud here, by myself in the middle of whatever piece of woods this is next to Pennsylvania State Game Lands 63. No one else is here, but if there were, they would think I’m a maniac. Was I seriously just feeling sorry for myself because I’m on a trail in Pennsylvania on a sunny and clear January 11 afternoon instead of a trail in Maine on a dark, cloudy, deep-snow pre-dawn January 1? THAT’S my big problem???

What the hell is the matter with me, I think, grinning now and beginning to walk again, mentally rolling my eyes. I get to schlep myself around in the woods as part of this awesome new independent career I’m making for myself, and in some roundabout way I’m actually going to make some money off this experience I’m having right now. These are first-world problems indeed. Actually, I’m having trouble right now recalling exactly what I was upset about. Oh yeah — I got sick and had a minor hiccup that slightly delayed the start of my awesome adventure, which I’m still going to get to do. This is just a temporary setback. I’m such a moron! The thought widens my grin, and I push along, picking up my pace a little, now enjoying the feeling of cold on my face.

I go on for a ways longer, appreciating the hell out of all sorts of shit around me now, my mood so completely turned around that I can’t stop giggling a little at what an idiot I can be sometimes. Seriously, if anyone could see me, they’d think a crazy person had been let loose from somewhere and was now continuing the descent into madness out here amidst the trees. Nope, I think. For a change I’m actually thinking clearly and rationally.

I carry on for a bit, and then when the trail splits into a fork, I stop a second time and breathe in deeply, filling my lungs with the crisp winter air. This stuff is good medicine for my congestion. I should spend more time breathing air outdoors when I’m all phlegmmed up like this.

I decide to turn around because I’m losing light and don’t want to push myself too hard after my immune system’s been down. No need to risk a relapse now that I’m on the mend.

The way back goes faster, as it always does, now that I’m at least a little familiar with the terrain. Plus I’m moving downhill. I love how I feel all cozy and insulated in my down-jacket cocoon. The brisk feeling of the winter air on my face and ears now strikes me as pleasant when juxtaposed with the snuggled-up feeling I have inside my coat.

Everything is good. I’m still getting to take the trip of a lifetime and have the insanely flexible job of my dreams. Things are working out just fine and improving all the time. And there’s no Hitler-esque evil magic all-powerful bad guy growing like cancer inside me like Harry had to deal with, which is always a plus. I make my way back down the Eagle Scout stairs and unlock my car, crawling back in feeling significantly better than I had crawled out.

Head a lot clearer, lungs fuller and more open, feeling better and healthier overall, I’m smiling as I turn the wheel and pull back onto the road toward home. All right, I muse, that’s maybe one mile down. Ninety-nine to go.