Posted on November 8, 2016 by Danielle Taylor

I visited Mount Rushmore National Monument on a 2009 road trip across the country, where I met up with two friends from Vietnam and one from Lithuania who had come to the U.S. for the summer. Our decisions as American voters have impacts on the rest of the world, and I hope we make choices that benefit those within our borders as well as on foreign shores.

Over the past year, I’ve journeyed back and forth across the U.S., exploring big cities, small towns and some really obscure destinations, but primarily using America’s national parks as the anchor points for my travels. As this year’s election has approached, it’s become more and more apparent to me how relevant our parks are to many of the issues currently at stake, and after absorbing several dozens of parks’ worth of information on our country’s people and history, I felt much more equipped to vote with confidence and conviction today.

America’s national parks don’t just provide brilliant backdrops for our vacation photos; they tell the story of our nation and its place in the world, and they provide insight on how we became the country we are now. I’m not just talking about the big parks like Yellowstone and the Grand Canyon, although those do have a lot to teach us. I’m talking about lesser-known but still monumentally significant parks like Little Rock Central High School National Historic Site in Arkansas, which reveals personal stories of the fight for integrated schools, and Manhattan Project National Historical Park in Tennessee, New Mexico and Washington, which dives into the difficult decisions and actions behind the development of the nuclear weapons that ended World War II, and Boston National Historical Park in Massachusetts, which gives insight on the reasons why America decided to separate from Britain and how much they were willing to sacrifice for freedom.

Our 413 national parks each share a different piece of our story, and they offer the benefit of hindsight on historical events and give us information so we can each determine how we might have acted under similar circumstances. They don’t tell us what to think; they tell us what to think about. And they give us context that can help us make better decisions for our world and its future. END_OF_DOCUMENT_TOKEN_TO_BE_REPLACED

Revised plans in the wake of sniffling 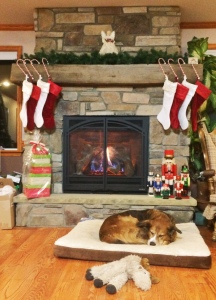 Not a mountain, but I’m not complaining.

Somehow, it’s been nearly two weeks since I got sick with this lingering bug, which has morphed from the flu to a sinus/upper respiratory thing to laryngitis, so this big national parks road trip I had planned to kick off over New Year’s is temporarily on hold until I’m back to 100 percent. I was really looking forward to my planned New Year’s Day hike in Acadia National Park and witnessing the country’s first glimpse of the sunrise in 2016 from the summit of Cadillac Mountain, but maybe I can do that next year. Still, definitely a drag.

On the positive side, the quarantine has given me some good time with my folks and my dog that I would have otherwise missed out on, and I’ve been able to work on a few assignments from the comfort of a recliner versus the back of a station wagon or a crowded coffee shop filled with distractions, so that’s been helpful!

Since the reason I wanted to start in Acadia was tied to a specific day and I missed that, I’ve shifted some plans around and am now planning to start local and then head south. END_OF_DOCUMENT_TOKEN_TO_BE_REPLACED